How far could a white person get starting an organization just for white people? 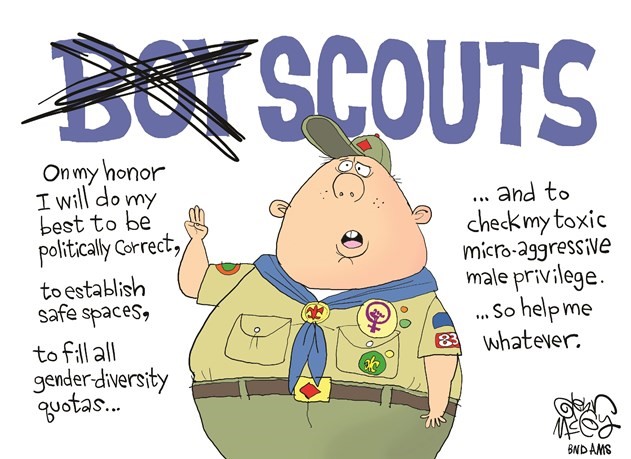 You can’t do that!

Folks, if you follow me here, you know that I rail against political correctness. Why you ask?

Here in the US, we have this thing called the constitution.  Some would love to chip away at it which those of us with a brain will fight tooth and nail against.  Many countries don’t have such a luxury of freedom of speech.  We do and you nutjobs are not taking it away!

Political Correctness is a way to do away with your free speech.  Without changing the constitution you are being subjugated by bullies.

You are willingly giving up your god given right to speak your mind.  Don’t do it!

So, here are my thoughts.

I am a white person.  I make no apologies for my lineage, DNA, gender or sexual preference.

I have been maligned by some as I don’t take crap from folks.  Life is too short.

Driving around today I heard an interview with a person referring to Girls in the Boy Scouts. The argument was vapid as was the person making it.

Some liberal-leaning person is pushing this agenda for reasons that I can only guess are to shake up everything that you think you know.

Turning everything upside down in the ordinary person’s world will take their attention away from the more significant clandestine activities that the MSM will not report on.

We are always bombarded with red herrings like girls in the boy scouts or boys in the girl’s showers.  If they rile up the masses on “PC” issues than you will not be paying attention to the other skullduggery like the corrupt department of justice, or the top officials at the FBI breaking laws to undermine the president of the United States.

If you know anything about a magician, “magic” is almost always accomplished with a form of distraction.  Those high up in the government learned this a long time ago.

Never watch the shiny object, look at the other hand.

The same is true regarding girls in the boy scouts. Unfortunately, they are destroying an organization which young men today genuinely need.  With absent fathers, these young men need guidance from other Men that would be a mentor for them.  Instead, this will work against the fabric of this country by destroying the young person’s ability to connect with men of good moral character.

The simple facts are that young people today who grow up in a dysfunctional family without both parents around look to older kids for mentoring.  If these older kids who also grew up in this environment are not of good moral character your child is screwed.  The child is left without too many options. Yes, the culture in Black neighborhoods is especially hard hit and that is a sad state of affairs.

The NAACP should fight this.

Where the hell are they?

While I would offer to you that is one more step in making boys less virile, I think it might blur the line a little where sexuality is concerned.

If there needs to be an organization where both sexes can play and learn together for god sake, don’t let it be the Boy or Girl Scouts.  How about just Scouts of America.

This question really rises from the ooze of political correctness when one asks if there should be any organizations which are sacrosanct?

Either there is, or there is not.  If there are not, I as a white person want to join the NAACP.  White is a color, isn’t it?   Has the NAACP lived past its usefulness? Has the BSA lived past its?

If you want to do away with racism how about leading the charge and do away with organizations that cater to one skin color or sex.  If the NAACP is ok then, why not the NAAWP  (National Association for the Advancement of White People.)

Who would stop me, or you?

Do you realize that many folks of color who read this will immediately dredge up visions of white men with white sheets and burning crosses?  How sad is that?  The KKK was a Democrat formed entity BTW.

The NAACP was created in 1909. Do we still need it?  We had a black president what else do we need?  How about the Black Caucus, what if we had a White Caucus?  Do you see the problem here?  Do you see the huge double standard?  Fix it!

White people are being silenced by racism through the PC culture.  Screw that!

It would seem to me that one way to defeat racism or prejudice would be to do away with all such groups who are not inclusive of all people.

I just wonder what the backlash would be if I started the NAAWP? The PC police would brand me as a heretic or a racist or both.  Neither is true, but the loudest voice would be that of the NAACP and Al Sharpton or Van Jones the communist.

CNN would have something to talk about other than Russia!  At least that would be refreshing.

The double standard is glaringly blinding. With left-leaning groups destroying the fabric of the BSA I hesitate to think of what the unintended consequences will be.  Maybe the girls can get the boys to play Barbie or Dress up with them?  I fear this will lead to yet more PC Pussyfication of the men in this country.

I will undoubtedly get some pushback on this blog, and that is ok.  If they are fair-minded they will know what I am saying is fact.

If not, I can ignore with the best of them.

I just don’t know what is happening to men in this country.  Is this that way where you live?  Are men still men, or are they only heroes on the weekend in front of the telly?

Don’t you even dare think that I am some sort of anti-gay person either?

If you have any doubts, read some of my novels, that will quickly dispel your preconceived ideas.

I have known too many young people who were experimenting, or confused, but after college decided that their birth sex was what they were. It was almost as if it were cool to be gay.  Today I am a girl and tomorrow I am a boy.

C’mon let’s not go there.

Experiment away from your peers.  We don’t need a lot of children with some PTSD from seeing a well hung young man showering or dressing with them.

What I am espousing is common sense, and this blog is a starting place for conversation and or debate.

Keep it civil, and we can chat.

Ok, I have other things to do so off with you!

Thanks for reading and following me.

Have a great Friday and super weekend, and by all means, take some time to brighten up the day of someone else.

I find that serving others helps me stay grounded in who and what I am.

2 thoughts on “National Association for the Advancement of White People”