Now we learn that the face on Mars is not just our mind playing tricks.

This is a quick note to let you know that act II is well under way. At present, a small contingent of the ship has left for the surface of Mars.

While getting water from the polar caps, they found that upon closer inspection the FACE on Mars appears to have subterranean structures.

They have been stuck there for two days while I dream up what they will find.

Is this important to the story? Yes

Is it critical, not sure.

What will they find? You will have to follow me and wait like the rest of us to discover the true story on the face on MARS.

I hope you all had a perfectly splendid weekend and that your Monday is not too objectionable.

“Sure, what am I imagining TW?”

Imagine that you find this guy really hot.  This guy is so cool that he has no clue he is cool.  You watch him work on things, and you admire the way he thinks.  He is kind to you but does not come on to you in any way.

Imagine you work with this guy for months on end, and you don’t think he is noticing you but, he has no ring and never talks about anyone in his life.

Ok, he is single, why?  The guy is built, smart and dedicated to his work.  You see him working on a pet project that his company allows him to do, and you ask him, ‘what is that for?’

The guy turns to look at you as if for the first time.  His eyes relax, and he smiles as he begins to talk with you about his hobby of technical rock climbing.

‘That explains why he is built the way he is but ‘rock climbing?’’

You can tell from his relaxed way of talking about it that if you want to get into his life, you need to try and understand what makes him tick.

You make a note to research rock climbing so you can engage him with more than a passing interest.  That night you talk to your friend, who was your roommate in college.  She tells you that there is a place not far from her that teaches rock climbing.

Now imagine you are kind of afraid of heights and yet pull it together and learn how to not only master your fears but, you can get to where you are not scared of dying.

With these new-found skills and understanding of the hobby, you began to engage Elliot, Omicron’s ‘fair-haired boy’ regarding a project he is working on.  He tells you that it is a device that destabilizes the atomic bonds of the rocks in a narrowly focused beam, making it super easy to place a hold.

Your job, however, is to report back to the owners of Omicron what he is working on.  They, of course, see this ‘toy’ as a weapon of immeasurable value.  Copying his notes and designs they are sent off to a facility deep within area 51.  Elliot is very much against building weapons, and that is why they hired Susan.

Back in 1947, this alien craft supposedly crashed in Roswell.  What they didn’t know it was not one but three.  Two scout ships crashed just, and one, a much larger intergalactic spacecraft returned into the time-space continuum of the earth, forcing millions of metric tons of rocks to eject from the ground, looking like some kind of geological anomaly.    The place is, of course, the ranch where Elliot’s parents were both living when the crash occurred.  It is also where they mysteriously, disappeared.

Onboard this craft under the rocks is a sentient computer, much like HAL in Space odyssey.  Unlike Hal, this computer can tune into the human brainwaves from quite a distance.  That computer takes an unhealthy interest in human sexuality and develops a few quirks along the way.  (All characters must have a flaw, right?)

Susan convinced Elliot to let her accompany him on his vacation.  She is giddy as she thanked her one day and called her ‘honey.’  ‘He does notice me,’ she thought.

While Susan is in hopes to snag the heart of Elliot, Elliot is in hopes of finding the mystery of where his parents disappeared to, hence the entire interests in rock climbing.  Whey they disappeared, that was not one shred of anything left of them.  Footsteps that just ended or a mysterious note left in the sand.

On this trip to the back of his ranch, while rock climbing, Elliot would dislodge some rocks that fall into a crevasse, and when they land, they make a mysterious ‘clunk.’

Ok, this is you.  Whether you are Elliot or Susan, what happens next is an adventure into another world.  What will you find, and what will you do?

The military has a listening post not too far away, and that all plays into this adventure, which starts out ‘Under Roswell.’

This novel is 681 pages.  The print version is what it is because of the printing cost.  Many of you prefer that, and I thank you.

It would be fun to write a blog on the men are from mars and women are from Venus book. Different topic… 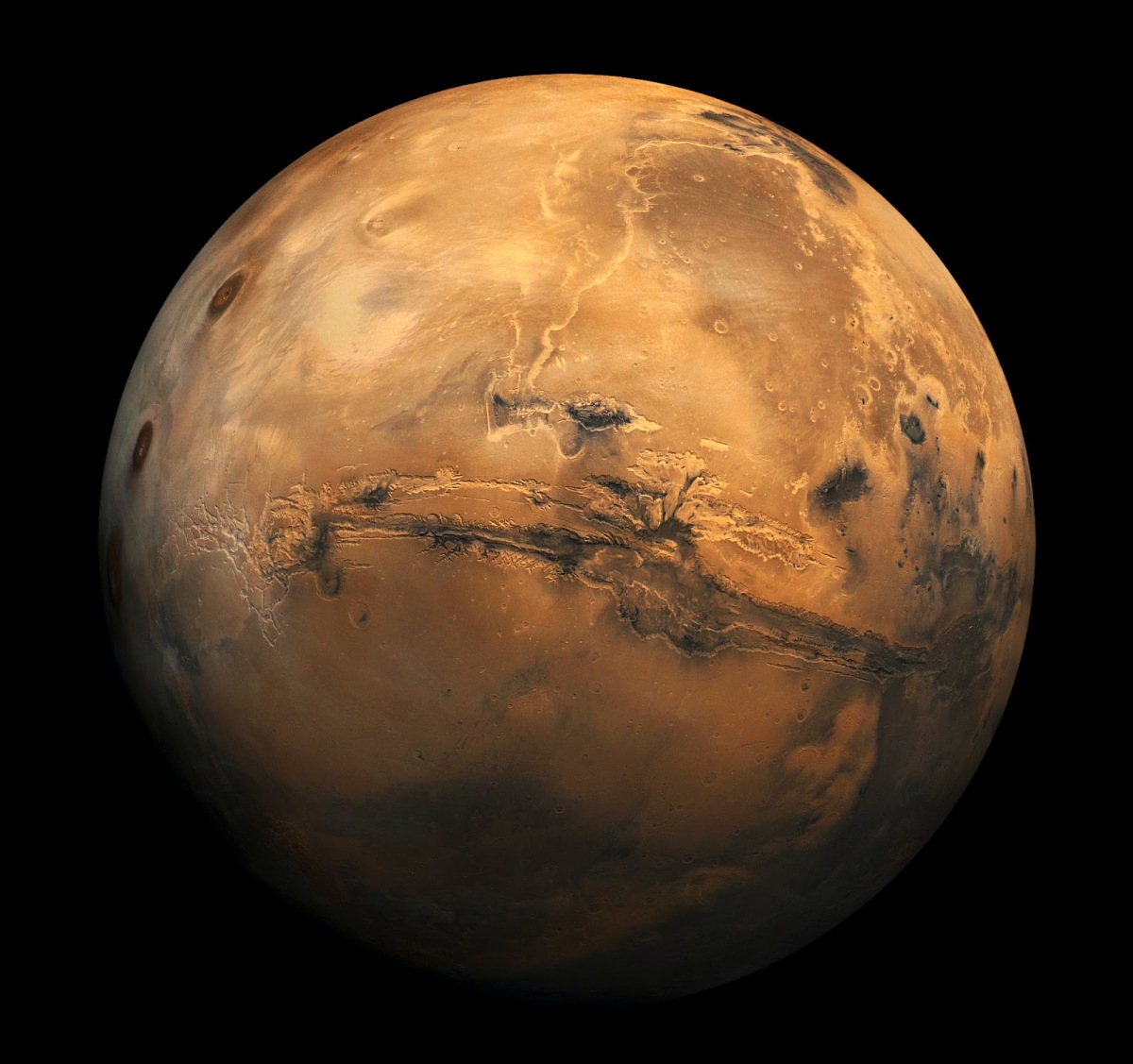 It is no secret that I am a science fiction writer.  If you did not know that, you are not reading things too carefully.  I was looking at this old picture of mars.

Here you can see what they are calling the Grand Canyon on Mars.

I would think this is more like the Marianas Trench on mars.

It takes little imagination to see that there were once great oceans covering the red planet.

Whether we are descendants of the red planet or not I think it would behoove us to learn where the atmosphere on Mars went and where did the water go.

As I was researching this I found that scientists are finding plastic bags and other forms of trash in the Marianas Trench.  Just possible we should go look in the trench or grand canyon on Mars for trash or other signs of a past life…or the water…

Thoughts comments and conjecture on this subject are welcome here.

The revised version of Tipping Point now 92K words is on Amazon and it is a free read on Amazon Kindle Unlimited.  Jeff Bezos is getting a divorce and his ex-bride needs money…So read my books, and help her out… 🙂

If you like my novels please consider leaving feedback.  Once a book receives over 50 (feedbacks) Amazon actually starts to assist authors like myself at that point and suggest it to other purchasers. Was Tesla getting messages from Aliens?

I just have to gush over my own books. Yes, I really do as this one was so much fun to create. I take two parallel stories and meld them together on a crash course.

When you read the paragraphs, you will feel like you are the characters. Isn’t that the hallmark a good book?

When War of the Worlds was released, and we watched it again on the big screen how scary was that? As the Martian craft systematically exterminated people, I remember my anxiety as the two love interests are flying just above the tree line to escape the Martians. The subsequent crash and then the lady scared out of her wits is trying to take care of the newest man in her life.

When you read a book, it should be better than that.

Reading the words as the writer wrote them you become that character. You are inside their head and feel what they are feeling. When they are thousands of feet under the water in the submersible that is not tested to that depth you can hear the thing creaking as the pressure builds on the tiny craft.

You know that in an instance you could be crushed like a bug on the windshield and it causes you some minor anxiety.

Yeah for the writer and yeah for you!

In one of my other novels “Cyber Subs,” you become the girlfriend who is watching her best friend get on webcam slowly removing her clothes teasing the folks paying her to strip. You are just a few feet away, observing the action as something about it excites you. That feeling inside you that you are all too familiar with is there in an instant as you get up and cross over across the room and join her in front of the webcam. Wearing just a diaphanous gown suddenly it is you in front of hundreds of strangers expecting you to remove your clothing.

What do you do? Are you scared? Are you anxious? Are you turned on? Are you “misty?”

When I write it is the strangest thing, it is me in each and every character. I channel them as it were. Their dialect, their build and so on for the moment I am them. I desire to put enough of them into those words that you too can be them.

With Thirty novels out there written by yours truly, you should find something that interests you. Do not forget that Nudist of Shangri-La was inspired by you my readers, so I do listen to you. Do you have an idea of something you would read?

I am taking a little bit of time away from writing to market my current novels and build my brand. It is during this time that I am open to suggestions.

I hope that you all have a wonderful weekend and thanks so much for taking time out of your day to allow me to be some small part of it.

I like to give back to you my readers and followers, and I desire to do so through this blog and by placing my novels out there inexpensively enough that anyone should not have trouble getting them.

If you take the time to let me know what you think of them, I do appreciate that. I get all sorts of e-mails with page numbers and such that I should look at this miss spelling or that one. Don’t get me wrong on this I do appreciate them. I make notes and then go back and fix them as time permits.

Have a super great weekend!